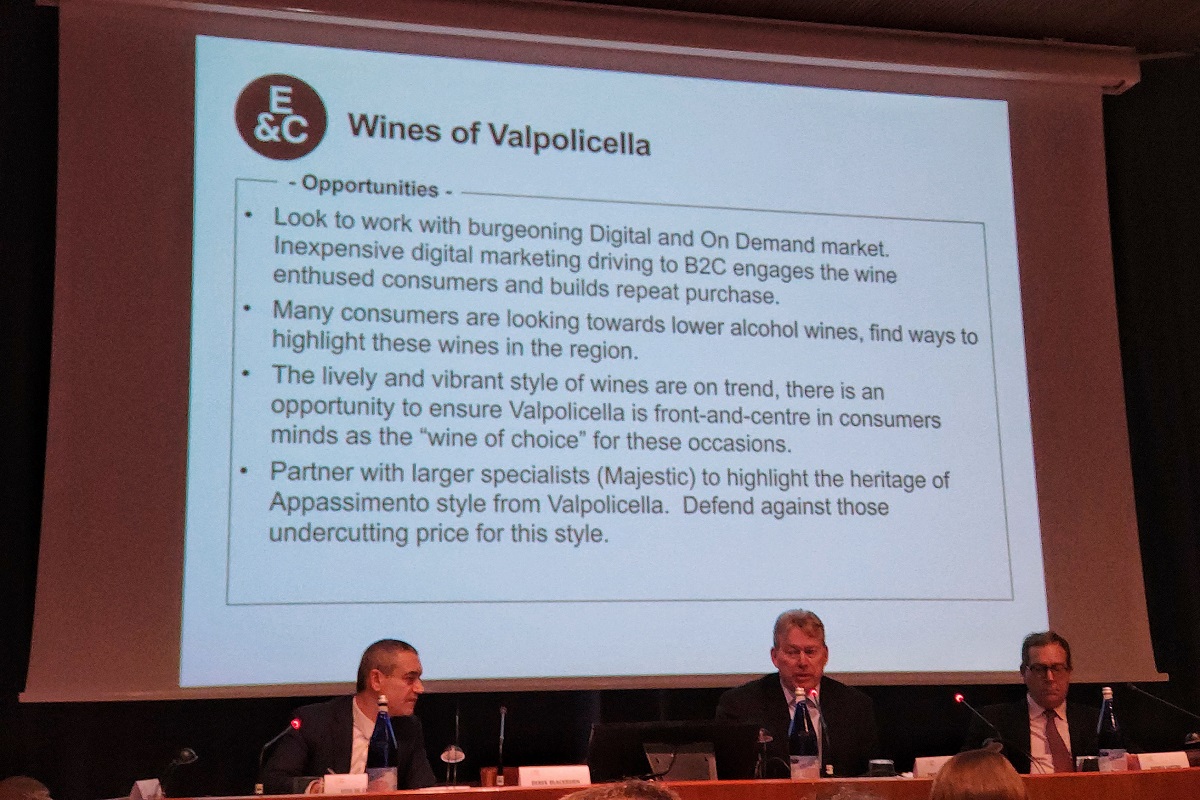 Again at this year Anteprima Amarone, the organiser had delivered an excellent presentation. Apart from tasting the samples from the wondrous 2016 harvest, this year schedule also included a comparative tasting of Valpolicella wines from different subzones, blind tasting with other products that employ similar air-drying techniques and finally a market conference on key export markets. And the cumulative effect of this year’s program left many people rethinking how to make Amarone della Valpolicella fit in future market.

The society and its demand

This year’s conference put the spotlight on the four key export markets of Valpolicella wines. Germany, United Kingdom, United States of America and Canada. Despite their geographical differences, there were some similarities. One, people are looking for wines with lower alcohol. Two, consumers demonstrate high price elasticity. Three, the availability of a comparable substitute in the market. Four, the social expectation of young wine consumers.

We are living in an age where people had never been quite as conscientious about their health and diet as they are now. The rise of various diet plans, fad or not, signals people intention to live better, longer, and healthier. And this coupled with the recommendation of limiting alcohol (and calorific) intakes is drawing people towards finding lower alcohol wines, in the hope of still having the same pleasure but lessen the guilt.

Interestingly this comes after almost two decades of buying opulent, dark, full-bodied wines with countless accolades from wine critics. Are we in a full-circle now? Are people finally breaking free from the idea of intensity?

Furthermore, we are hearing more about people talking about social equity in the industry that they are paying money to. Are there more local community involvement, are there more gender diversity, or are the environment taken care of in the process of making this product?

I spoke to a pair of cousins from a renown winery in Valpolicella. Their names are withheld because I did not seek prior permission to quote their opinion. In their long standing winery business, they already have a high level of social equity practices in place. But it has never crossed their mind that such practices will one day become a branding asset. Maybe the time is now.

Even if there are people who are still looking for the good old big body Amarone della Valpolicella, there too lies a bigger problem for the Valpolicella region. There had been hearsays that wines from South Italy had sneaked its way up north and made its way into the bottling.

The reality today is that these wines are bottled and in the market as direct competitors. Primitivo, a grape from the south, is being deliberately crafted with a similar air-drying method that gives a rich and high alcohol wines selling at a fraction of Amarone della Valpolicella price.

If consumer acceptance of a substitute is based solely on the lower price tag, then that is worrying. Does that mean that the Amarone della Valpolicella product is attractive only by the taste of its richness and elevated alcohol?

And so the trouble the region faces is on multiple fronts. History had taught us that fighting against another product by price alone is a slippery downslope. Thus the only solution is to value add on their offering, selling its unique historical and cultural values to win the customers while consistently making remarkably good wines.

One can take an example from the marketing of Champagne, from Napoleon to Winston Churchill, from John Maynard Keynes to Mark Twain. They have all spoke about Champagne in one way or another, and their quotes live on today on shop windows and marketing lines.

We have some mentions from Hemingway for the wines of Valpolicella, but few were kind. Maybe we should start investing in the future today. Pay an author and buy a quote.

What is on offer today?

While the 2016 Valpolicella and Ripasso wines are already in the market, tasting a line-up of Amarone della Valpolicella confirmed my understanding that the region has produced exceptional wines in two consecutive years. In professor Diego Tomasi words, this is a near-perfect vintage.

But because of the vineyard planting increased, the consortium declared that only 40 per cent of the harvest goes into the making of air-dried wines. So naturally, the quality of the wine is undisputed. Furthermore, with an optimal air-drying condition, the grapes on average had developed 30 per cent more anthocyanins compared to the 2015 harvest.

To avoid making this piece unbearably long, I shall discuss in greater details on the 2016 vintage in another article together with my selected favourites.